The whaling history of Bruny Island

We found ourselves unexpectedly learning about the whaling history of Bruny Island, while on the Fluted Cape walk.

You see, along the track, we came across signboards with information on the whaling past of the area.

Bruny Island once had eight whaling stations. As early as 1829, there were already three right along the Adventure Bay shore.

Ninety men worked at these stations. They were extracting whale oil from the blubber of whales who had been hunted and killed. 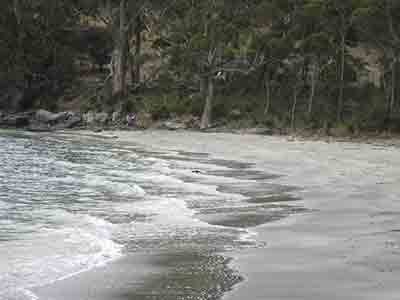 Looking at this beautiful shore line, it's hard to imagine whales being slaughtered.

Reading about whale carcasses and whale blood was not a lot of fun for me. But I was learning about what actually went on here about a hundred and eighty years ago.

On one of the signboards, we read this:

George Augustus Robinson, Missionary to the Tasmanian Aborigines, witnessed and described an 1829 hunt in Adventure Bay:

"...immediately the whale was harpooned, the boat was dragged out of the bay several miles, passing through the water with a rapidity scarcely to be credited, the whale in the meantime tossing and tumbling about in every direction, lifting her flukes several feet above the water as if in the act of feeling for its aggressor..."

Why would anyone be involved in whaling back then?

It was all about getting whale oil. This was used to light lamps and in candle wax. We are of course talking about a time when electricity was not yet available.

Fortunes were made and lost in the whaling industry back then.

Finally, the whaling industry collapsed in the 1840s. And since then the whales are coming back.

It has been estimated that twelve thousand right whales were killed in Australian waters between 1835 and 1839. That's a lot of whales in a very short time!

It is believed that there are only three thousand left today.

Yes, the southern right whale is still an endangered species.

Return from this Whaling history of Bruny Island page to Tasmania Attractions home page
[?]Subscribe To This Site